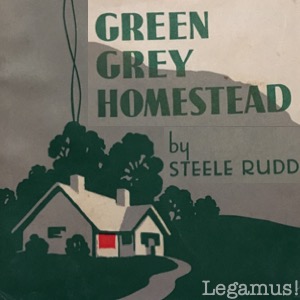 This book describes the experiences of Dick Gall, a young Australian countryman, from the time of his first application for ‘a homestead selection’ to that of the birth of his ‘son an’ heir’ on the green-grey homestead. It also includes memories of his younger years, when he chased scrub cattle, hunted wild pigs on wild horses and played on the polo field. Steele Rudd knew what he was writing about, having grown up on a homestead selection at Emu Creek himself, and worked as a stockrider (or cowboy) as a teenager.
The book is written in a very lively style, and remarkably, in the second person singular – “you” will literally be Dick Gall himself. The opening sentence: “You’ll be single when the idea of taking up a homestead first gets you.” Or later: “You’ll be three years on the little grey homestead, working hard and becoming well-known and respected; you’ll receive kindly handturns from one and another, and be known to them all as Dick Gall.” (Summary by Anna Simon)