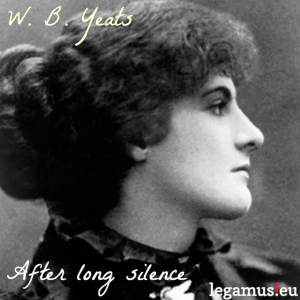 Yeats’s poem ‘After Long Silence’ was written late in life. In it, he reflects on his relationship with the author Olivia Shakespear.

This project brings you recordings by seven different Legamus readers.
(Summary by Newgatenovelist)

END_OF_DOCUMENT_TOKEN_TO_BE_REPLACED

The Great Gatsby follows a cast of characters living in the fictional town of West Egg on prosperous Long Island in the summer of 1922. The story primarily concerns the young and mysterious millionaire Jay Gatsby and his quixotic passion for the beautiful Daisy Buchanan. Considered to be Fitzgerald’s magnum opus, The Great Gatsby explores themes of decadence, idealism, resistance to change, social upheaval, and excess, creating a portrait of the Jazz Age or the Roaring Twenties that has been described as a cautionary tale about the American Dream.

First published by Scribner’s in April 1925, The Great Gatsby received mixed reviews and sold poorly; in its first year, the book sold only 20,000 copies. Fitzgerald died in 1940, believing himself to be a failure and his work forgotten. His work, spearheaded by The Great Gatsby, experienced a revival during World War II, and the novel became a part of American high school curricula in the following decades. The book has remained popular since, leading to numerous stage and film adaptations. The Great Gatsby is widely considered to be a literary classic and a contender for the title “The Great American Novel”. The book is consistently ranked among the greatest works of American literature. (summary by Wikipedia and Martin Reyto)